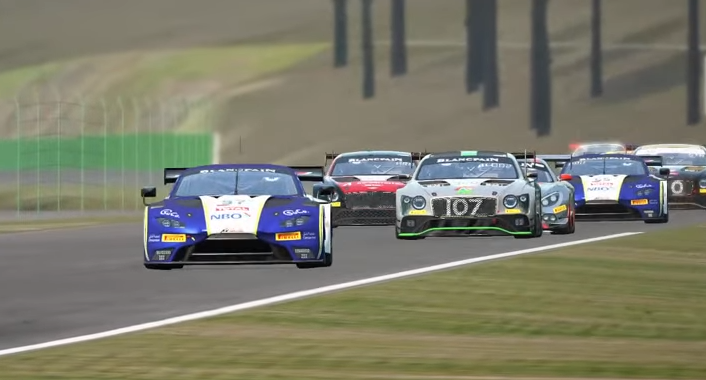 With the much anticipated RaceFace Spa 3-Hour Endurance Race hanging in the balance due to the ongoing power outages across South Africa the organisers managed to find a time-slot in which almost all entrants could participate, even though the race had to be reduced to a 2.5 hour race with only a 30 minute qualifying session.

Qualifying came to a conclusion with a tight battle for pole as the top 3 qualifiers were separated by only 4 tenths with Chris de Wet taking pole in the AMR V8(in the absence of team mate Brandon Kruger) followed by Mark van Rensburg and Stephan Engelbrecht in the Bentley and J.C. Grobler and Bruno Cahilhe taking the 3rd spot on the grid.

Chris de Wet managed to keep his lead and opened a bit of a gap at the start of the race and even though he came under pressure from J.C. Grobler early on, he managed to keep his head down and lead from start to finish to take the win after a flawless drive. Johann Grobler(The other Grobler on the grid) worked his way from the back of the grid and made a 1-stop strategy work to his favor to take 2nd spot in the Ferrari while Paul Gerber recovered from trouble early in the race to complete the podium.

RaceFace would like to thank our media partners Evo Media who produced a top quality live stream of the race and a special thank you to GeeMax(George Smith) who added invaluable insights in the commentary-box alongside ShushieBushie.

We would also like to thank all the viewers and supporter of the race, but especially the drivers who made this race a real success with great racing in the true spirit of endurance. Even as the chances of victory faded quite early for some, everyone kept going until the checkered-flag which displayed the great skill, sportsmanship and camaraderie in the local sim-racing community.

We cannot wait for the next race, keep an eye out for the race calendar of the first season of 2020 to be published soon.